The Story of a Buddhist Nun’s Divorce 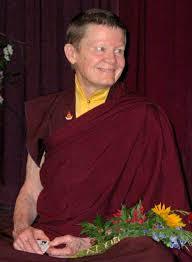 Divorce can happen to anyone. Sometimes it can be seen from a mile away. Other times, it’s unexpected. The best thing that anyone can do after a divorce is learn what they can from it and move on. One extraordinary woman says that her second divorce taught her some of the most important lessons of her life.

Pema Chödrön, a Tibetan Buddhist nun, had married twice before her ordination. She is the author of several highly-regarded books in the Tibetan tradition. Before her fame as a nun, she was Deirdre Blomfield-Brown, a housewife who was raised on a farm and lived with her second husband in New Mexico.

One day, she was at home when her husband came up around the corner and revealed that things weren’t going well between them and that he had been having an affair. He asked for a divorce. In retrospect, Chödrön said that there were problems but at the time everything seemed to be going well.

After the divorce and years of grieving, she learned that things could change at any time. She also realized how attached she was to having someone confirm her identity. The experience forced her to confront this and eventually lead her to current path. Now she considers her ex-husband to be one of her greatest teachers.

Stories like this are inspiring to people who are going through the pain of divorce. Time and reflection can make the wound heal. If you need help coping with your divorce, seek help. Call Elise Buie Family Law Group, PLLC for a free consultation about your situation. We have resources for people who have undergone divorce and need help.